A barrio boy goes to Chinquapin 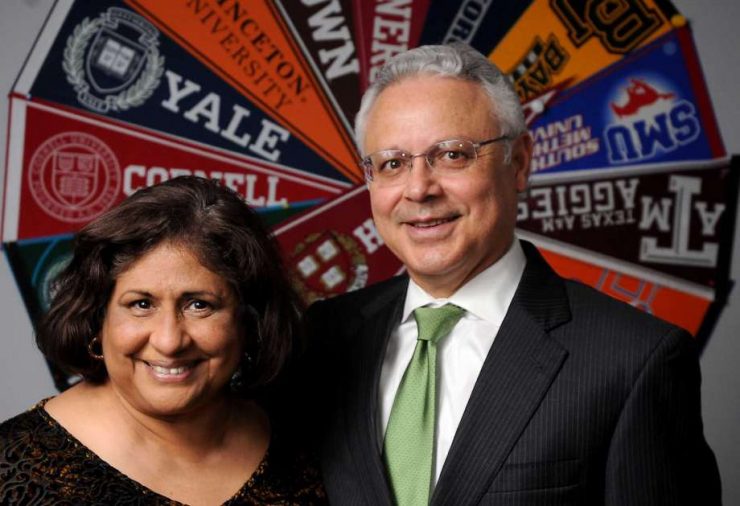 Chinquapin Preparatory School opened in 1969 with a cadre of multicultural students—eight blacks, two whites and six Mexican Americans. I was among the 16 students that composed that ragtag first class. The mission of Chinquapin has been to take students who are not necessarily the best, but who have the drive and discipline to improve themselves. The school wanted students who were hungry for a world better than the ones they lived in.

Essentially free of charge, the school should have attracted hundreds of applicants. But it was new and not well known, so applications were few. My interview took place at Ripley House, a community center in Second Ward in the east side of Houston. Founder and headmaster Robert Moore and four other teachers—recent college grads full of youthful idealism—interviewed the candidates. I was a good student at Rusk Elementary, but by no means brilliant; my English was hesitant, rudimentary, and ungrammatical, which led me to be quiet and timid, especially among those I perceived to be the owners of the language: white people. I believe the only reason I was accepted to Chinquapin is because I gave the right answer to one question. Fortunately for me, that question had a one-word answer.

Mr. Moore was a diminutive man, balding, wiry, and full of nervous energy. He had a benevolent look, but one that could quickly turn fierce when things went wrong. He was passionate about civil rights and he loved John F. Kennedy, Robert Kennedy, and Martin Luther King. During our interview, his blue eyes stared at me through half-rim glasses. His kind face became serious as he asked me: “Do you mind sleeping in the same room with a black student?” I responded, “No.” And with that answer, I became part of an experiment that transformed my life for the better.

The day we drove to Chinquapin was one of the saddest of my life. It was a Sunday in August, and my uncle Lauro, my cousin Marcos, my mother, and I packed into a blue Bel-Air, a clunker of a car that had taken my parents and their five children to Mexico on many occasions. My father, too tired from working six days a week as a bricklayer, did not come. I didn’t find that odd, since my father exerted all his energy to provide for the family, while my mother took care of domestic affairs. Or maybe he simply didn’t want to suffer the agony of losing his son.

The original location of the school was 30 miles from Houston, just outside Baytown. As we headed east on I-10, I saw parts of the city I had never seen: blue collar neighborhoods followed by truck stops and oil refineries, all lined up along the freeway. When we came upon a bridge with seagulls frolicking on the seawater, I began to feel that the school was a lot further than it really was. In the hour it took to get there, I didn’t utter a single word.

We got lost a couple of times before reaching the school’s entrance, a long driveway made of shells and dirt. As we drove at a slow, somber pace, I felt I had made a horrible decision and was being dragged against my will to live among strangers. But when we reached the school, it wasn’t at all what I expected: it was a beach house. Stretched horizontally like a barn, the house stood two stories high and sat on the sea. Behind the house was an open yard, big enough for a volleyball court and a field to play touch football. Beside the house was a trampoline, where students bounced up and down, doing flips and laughing.

Mr. Moore started the school with a grant from the Houston Brown Foundation. With the money, he rented a beach house on Trinity Bay, and in that two-story structure he housed the Chinquapin School, which contained bedrooms for 16 boys, a dining hall, classrooms, office space, and a bedroom for the headmaster and his wife. The teachers lived in smaller buildings scattered throughout the five-acre campus.

Mr. and Mrs. Moore were waiting for us as we got out of the car. The meeting was awkward; two well-educated, white people welcomed a group of working-class Hispanics who didn’t speak English except for me—and my English was basic. Hands were shaken, pleasantries exchanged, but little was said. After the brief encounter, my family left. The only words of encouragement came from my cousin Marcos. “Te va a ir muy bien en esta escuela,” he said and shook my hand. Marcos was five years older, and I looked up to him, but those words were of little comfort to me. They left and took with them the Mexican-American world I cherished: the family dinners with handmade tortillas; the Mexican movies screened at the downtown movie theater; the Mexican music that engulfed our house; the visits from family in Mexico. I was left alone to confront an Anglo culture of which I had minimal knowledge.

Mr. and Mrs. Moore led me to my bedroom on the second floor. I placed my suitcase under my assigned bunk, and then was invited to go outside to play on a trampoline with the other students. I was too distracted to know what was happening to me, but after dinner when I settled into bed, the feeling that I was all by myself grabbed me and I felt like crying. I tried to make small conversation with the student on the bed above me. His name was Gregory, an African-American from the Third Ward, one of the poorest areas in Houston. Intelligent and self-assured, he didn’t betray a sign of homesickness. I attempted to do the same.

When I went home after the first week, I was angry with my family. Mad because I felt that they had betrayed me for letting me stay at a place far from home. I refused to talk to my brother or mother about the school. “Don’t ask me any questions!” I lashed at my brother during dinner. My mother was startled and my brother tried to brush off the comment with a laugh. I knew they missed me as much as I missed them, but I was angry because the school had treated me so well and was I becoming part of another family. On Sunday I returned to Chinquapin without resistance, knowing that I was entering a new world that eventually would benefit me.

What made Chinquapin so welcoming was that Mr. Moore had faith in me. No other teacher until then and afterwards, took so much interest in my education. Like a patient father, he would sit with me and teach the tedious points of grammar from a workbook he had created. He made stick figures to explain the subject, verb, and direct object. Once I understood, he would move on. As I responded to his instructions with the zeal of a new convert, his expectations of me grew. He made me write one sentence, then another, then a paragraph, then a page. We wrote, wrote, and wrote—everyday. With the writing came the reading. I had never read a book that was considered good literature (students in the Second Ward did well if they could read a few pages from a textbook). Mr. Moore changed that. He taught me the joys of learning by introducing me to the great American authors: Hemingway, Fitzgerald, Thoreau, Salinger, and Twain. The life of a solitary writer appealed to me, and I decided then, in the seventh grade, that I wanted to be a journalist.

As the year progressed, the schedule of classes and duties slowly took shape. A typical day started with Mr. Moore walking around the student bedrooms at 7 a.m., yelling “rise and shine.” When we were up, we had to jog a mile around the campus, then shower and be ready for breakfast at 8 a.m. Dressed in shorts, t-shirts, and tennie shoes, we sat at communal tables in the dining room for breakfast.

With 16 students and five teachers, the classes were intimate, informal, and ran the gamut of the standard curriculum for middle school: math, English, history, art, science. But the one class that I remember vividly and lovely was typing. Mrs. Moore taught the class like a conductor leading a symphony. She stood in the middle of room, surrounded by a large U-shape counter that held a dozen manual typewriters. As she recited each letter—aaaa, bbbb, cccc—we typed, making a racket that was deafening. By the end of the year, I was typing 80 words a minute. This skill proved to be invaluable to me for the rest of my life, especially when I became a journalist and I had to conduct interviews over the phone and write on tight deadlines.

At lunchtime we gathered again at the dining hall and ate hotdogs, tuna sandwiches, and sandwiches made with government-issued peanut butter and jelly. At dinnertime, we fared better with fried chicken, hamburgers, soup, and other low-cost food items. We always had a cake to celebrate a student’s birthday. After dinner, we had study hall. The school did not permit TVs, so we studied and then went to bed to the breeze and constant buzz of a fan.

Mr. Moore believed that the students should give back for the free education they were given. The school’s motto was “Quid Pro Quo,” something for something, and so we had to give back by doing a variety of chores after classes. We had to clean the campus, manage the vegetable garden, sweep, mop, and tidy. These lessons would stay with me well beyond high school.

After Chinquapin, Drake University in Des Moines, Iowa, offered me a scholarship to study journalism, and I accepted without visiting the school. Armed with the bare necessities, I left like a lean warrior to fight for success and prove that Chinquapin was a worthy school. Four years later I graduated, and after several more years of reporting for newspapers in Dallas, Austin, and Houston, I went to work as a writer at Rice University, where I’ve now been for more than two decades. I eventually became director of multicultural community relations.

I often think back on Chinquapin’s original mission: to take students who are not necessarily the best, but who have the drive and discipline to improve themselves. The school and I found each other at just the right time, and now we’ve got the success stories to prove it.

Paola Bernal (‘13) remembers what she wore on her first day of sixth grade at Chinquapin, walking into the gym that morning where [former co-directors] Bill and Kathy Heinzerling introduced themselves, “We all started together like we were family...