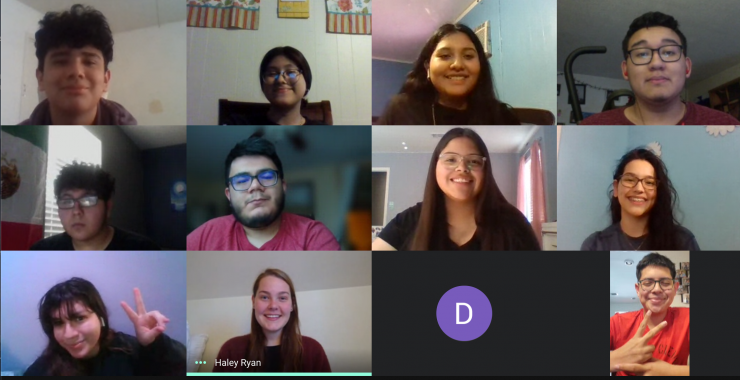 My first semester as a Chinquapin teacher, the director at the time asked me if I would be the “Chinquapin supervisor” for an elective called Street Law. A University of Houston Law Center student would come to campus twice a week, and teach our students about the American legal system and their place within it. As a social studies teacher I was very excited to facilitate our students becoming more ‘legally literate’. During the 2019-2020 school year, the Street Law students spent every Tuesday and Thursday afternoon learning about their constitutional rights, the organization of the justice system, and tirelessly practicing for the spring Mock Trial competition.

If you are unfamiliar with high school Mock Trial competitions, you are missing out on a great spectator sport. Teams of students, generally less than ten members, are given identical briefs with information about a fictitious law case. It can be a civil or criminal case and the briefs include witness affidavits, police reports, and case facts. Each student is assigned a role, and the teams spend the semester memorizing the brief, creating direct and cross examination questions, and practicing for the ‘trial’. As soon as Chinquapin students heard the word ‘competition’, the race was on. The dedication I saw in our students was unbelievable- they read and annotated, wrote and rewrote. The classroom regularly sounded like an episode of Law and Order and was buzzing with the steadily growing confidence that they would win the event.

Unfortunately, the Covid-19 virus had other plans. The Mock Trial competition was postponed and eventually cancelled, and Chinquapin remained virtual through the end of the spring semester. When this fall semester began, there were actually two Street Law groups- a new crop of students and a handful of the 2019-2020 students who wanted their chance at Mock Trial. The classes met separately, with “Street Law 1” starting at the beginning of the course and “Street Law 2” focusing on the mock trial right out of the gate. The most incredible part was that, at the beginning of the semester, there was no promise of a Mock Trial. Each class was working with this material with no guarantee it would amount to anything. Chinquapin students truly enjoy learning for learning’s sake, especially about such relevant topics. Luckily, a competition was announced and both teams set their eyes on the prize.

Distance learning and Zoom offered a unique set of challenges, but each class worked closer and closer until the competition was upon us. It was a tournament format, spread out over a three day span. I was confident that both teams would make it to the second day and had a feeling that Street Law 2 would make it to day three, but I still waited anxiously by my phone for the UofH students to update me. I had started an email chain to the faculty to excuse the students from their classes and felt more and more pride as each update was ‘well, the students will be missing the next block too!”. The final four teams were announced- and both Chinquapin teams had made it! Unfortunately that was as far as Street Law 1 advanced, but the students were thrilled and have since refocused their sights to the spring. Street Law 2, or team “We Have Faith” (named after a student in the group), advanced to the final round. The team performed beautifully, to the point that their U of H advisor texted me that she was “in awe” of them. The ‘trial’ ended, and the judges dismissed the call to score the round. After a few agonizing hours, we got the notification- We Have Faith had come out on top!

It may be cheesy, but I think it is truly poetic that “We Have Faith” overcame all the challenges of the last ten months. These five Chinquapin students experienced the anxiety and disappointment of last spring but would not be discouraged. They returned in the fall and worked through every lost wifi signal, every sensational news headline, and every moment of uncertainty. They worked seamlessly as a team, supported each other, and did not stop until they had reached their goal. Between this team and Street Law 1, the other spring Mock Trial competitors had better watch out.